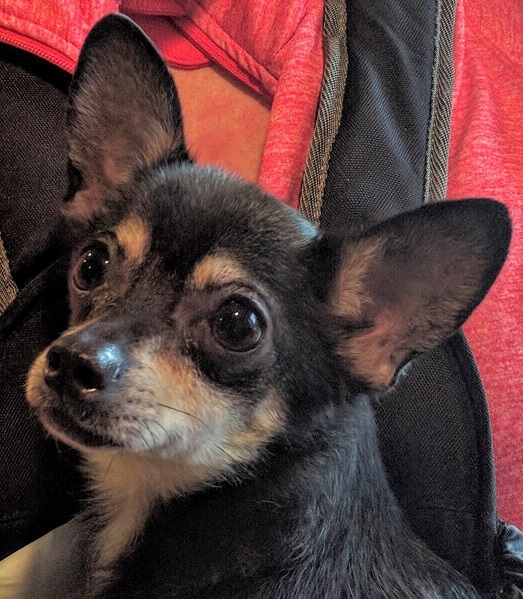 Taz is one of our inspiring rock star patients! He has gone through a tremendous amount of veterinary care for only being 5 years old. Taz had back surgery and was hospitalized for an Addison’s crisis both this past year.

Taz was rescued by his loving owners, Jaimi and Brian from another veterinary hospital a few years ago. Taz was overall a healthy, spunky little dog! Earlier this year, Taz develop a limp on one of his back legs. He lives with other larger dogs, so not much was initially thought of his limping. Then very quickly, Taz was unable to move his legs at all by the end of the day. Upon veterinary evaluation, Taz was suspected to have a ruptured disc in his back. There was so much inflammation around his spinal cord that he was unable to move or feel his back legs. He was taken to Seattle Veterinary Specialists for a consultation with a Neurologist. An MRI was performed and confirmed that Taz had a ruptured disc compressing his spinal cord. He was quickly taken to surgery where a hemilaminectomy was performed. In this back surgery, part of the vertebrae is removed to take out the ruptured disc material. Taz recovered from his surgery after months of physical rehabilitation and nursing care at home. He is able to move and feel his legs now, but isn’t quite able to walk without assistance. Taz kept trying to walk and developed sores in his back legs from scooting around on the floor. We helped Taz get fitted for a customized wheelchair made by a local company, K9 Carts. Taz is so happy to be fast and mobile again!

Taz was also diagnosed with Addison’s disease this year. This is a metabolic disease where the adrenal glands, a small gland located near the kidneys, is unable to produce proper hormones that the body needs. As a result, dogs with Addison’s disease develop abnormal levels of important electrolytes. They also do not have enough cortisol or stress hormone to respond to normal daily stresses. Taz developed vomiting, diarrhea and severe lethargy. He was hospitalized at Seattle Veterinary Specialists where emergency treatment was provided and further blood testing diagnosed him with Addison’s. Taz started treatment for this disease and was doing fine for several months until he had an Addison’s crisis. Taz’s electrolytes were severely out of range where is developed an abnormal heart rhythm, gastric ulcers, low blood sugar and was in a very critical state. The emergency team at Seattle Veterinary Specialists was able to stabilize Taz. The Internal Medicine team developed a plan for Taz long term to keep his Addison’s disease regulated. We help manage Taz’s Addison’s with regular exams, bloodwork monitoring, and by giving him a monthly injection to regulate his hormones. Taz has been doing great!

Taz inspires our veterinary team. Despite a difficult year for him and his family, Taz’s spirits have not been diminished and his family is Taz’s constant cheerleaders. He demonstrates the advanced veterinary care that can be performed in our furry family members. Needless to say, veterinary care like Taz’s can be overwhelming! We are here to help with the day-to-day care. With our medical boarding, we can help care for patients that need a variety of nursing care. It has been a pleasure to see Taz improve and to remind us to never give up!

Watch a video of Taz cruising around in his wheelchair on our Facebook at https://www.facebook.com/eastsidevetnewcastle